I’m a little late on this one due to the birth of our first child, so I suspect the coming months will be a bit quieter on the hobby front, but April turned out to be quite a productive month hobby-wise. Got a good run on some ongoing projects as well as the start of a new one.

Also finished off my house for the Americans to fight over:

Then I decided to dip into my ECW project to continue my army expansion, focusing on the Royalists.

Sir Thomas Howard’s (small) Regiment of horse, I actually repainted the flag since taking the picture, adding red and white stripes to the yellow border to make it stand out a little more:

And Prince Rupert’s regiment of horse:

A mishmash of Royalists (some rebased, some new) in a commanded shot unit under Colonel Ratcliffe Gerard: 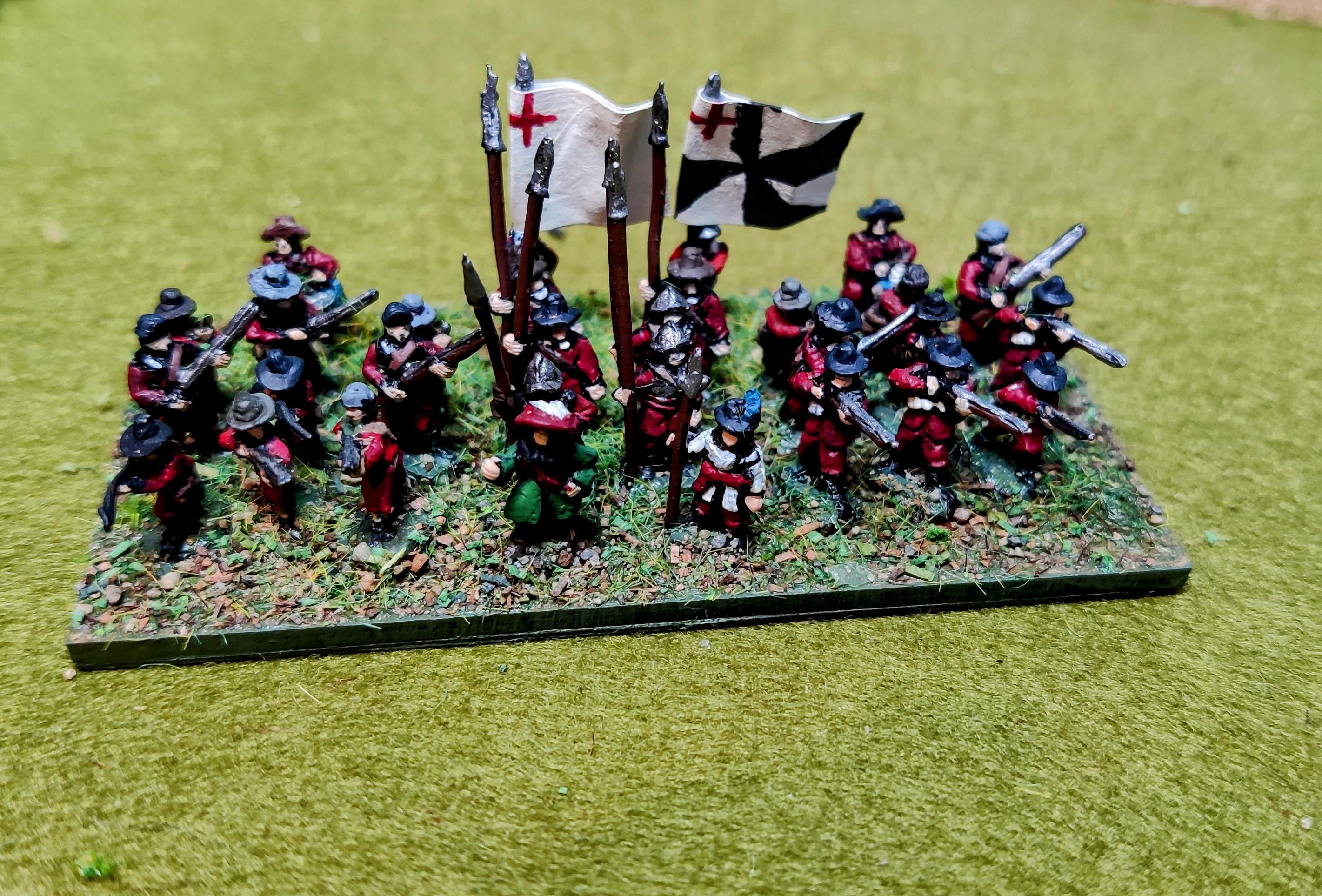 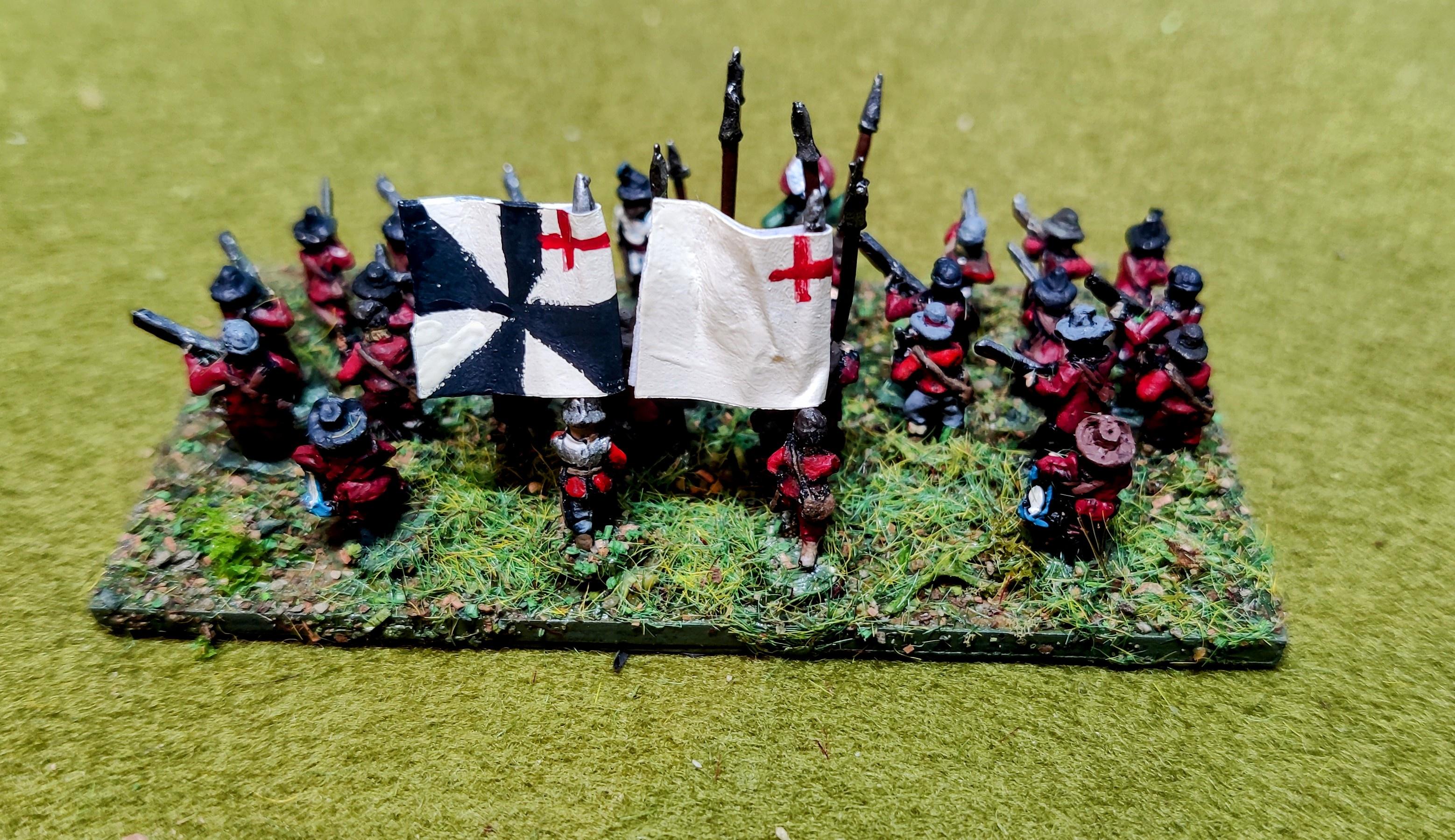 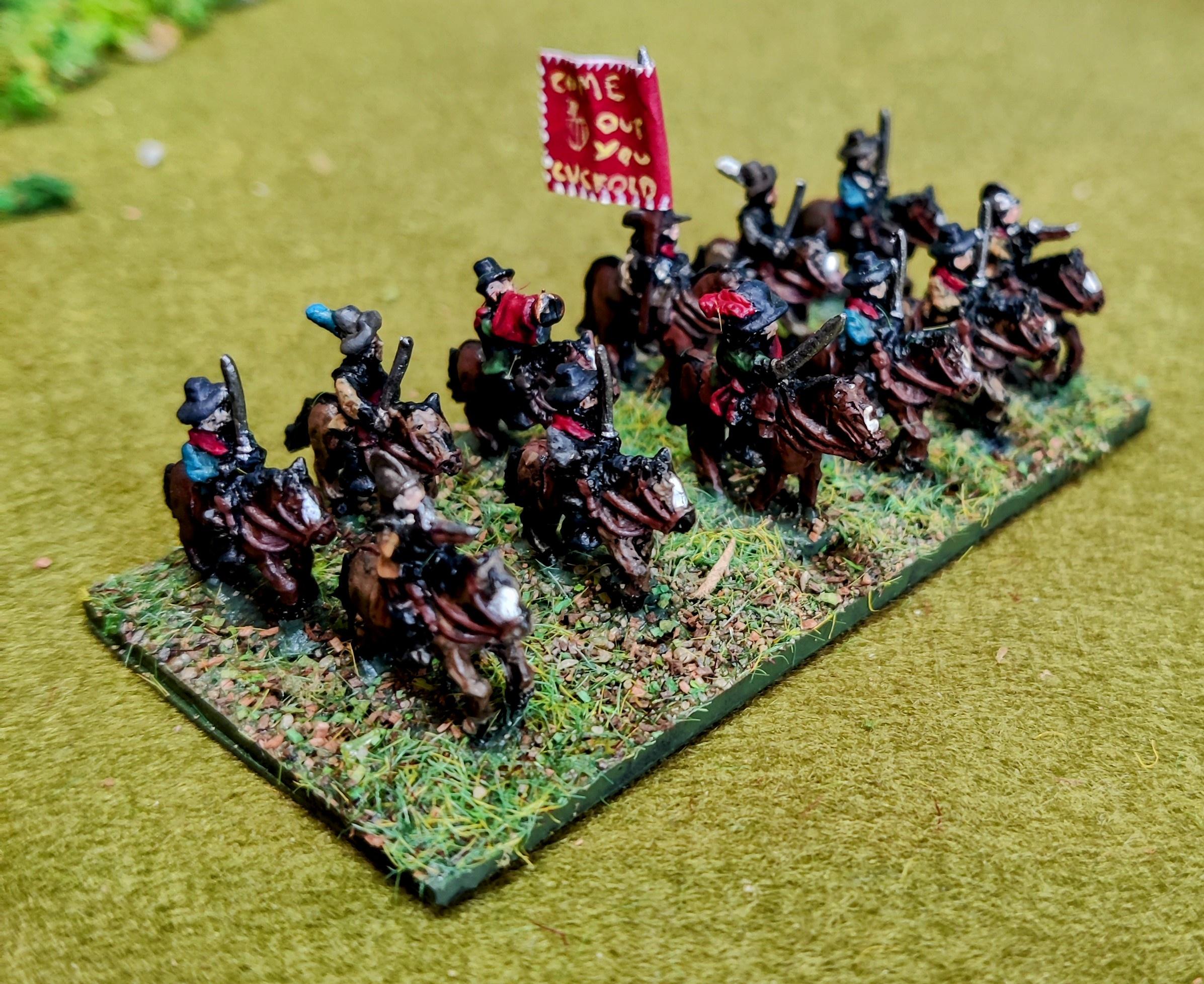 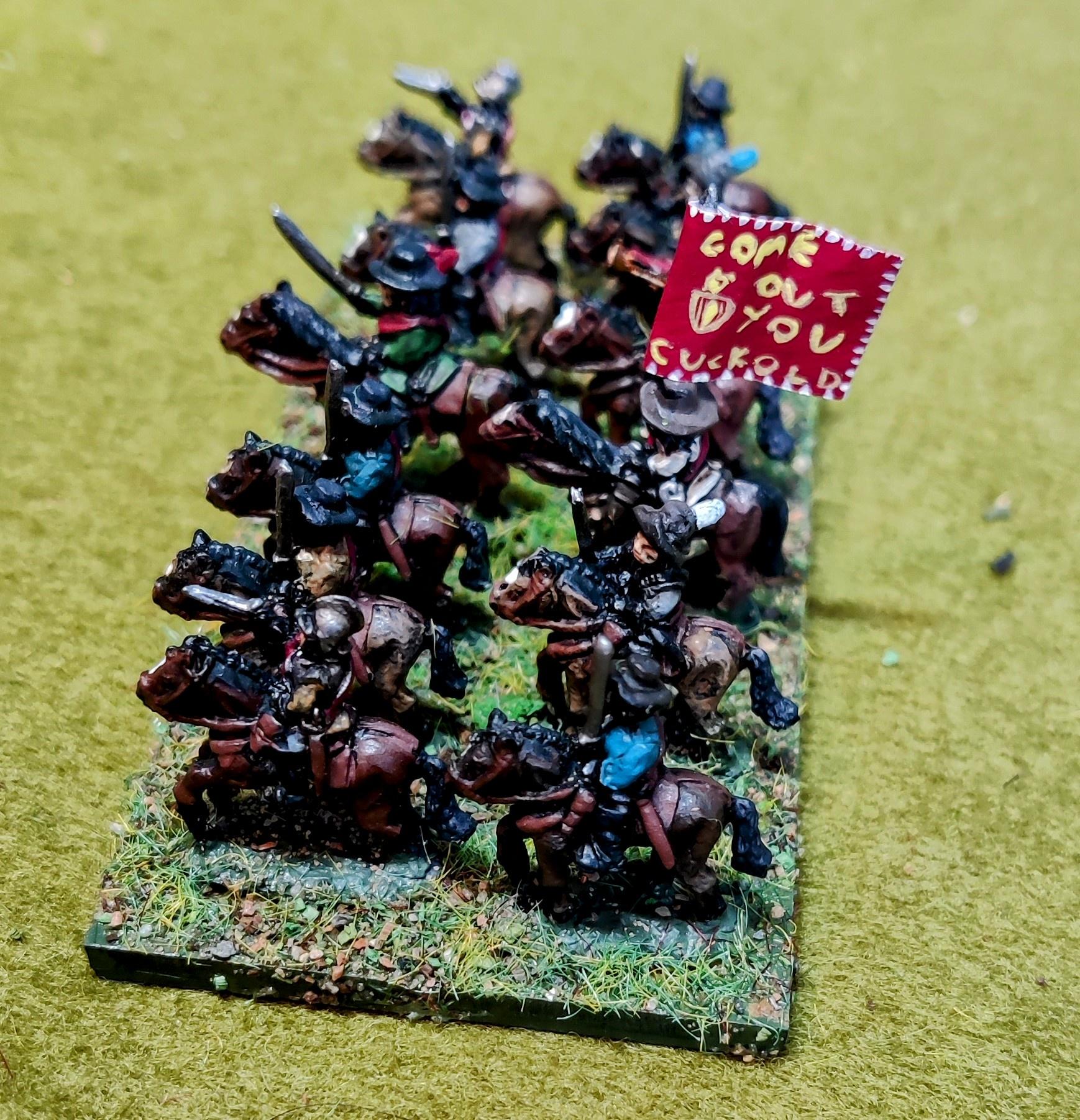 He famously bore cornets with phrases like “come out you cuckolds” and “cuckolds we come” possibly as just a general insult or referring to the marital issues of particular parliamentary rivals. However, one wonders doth the gentleman protest too much… 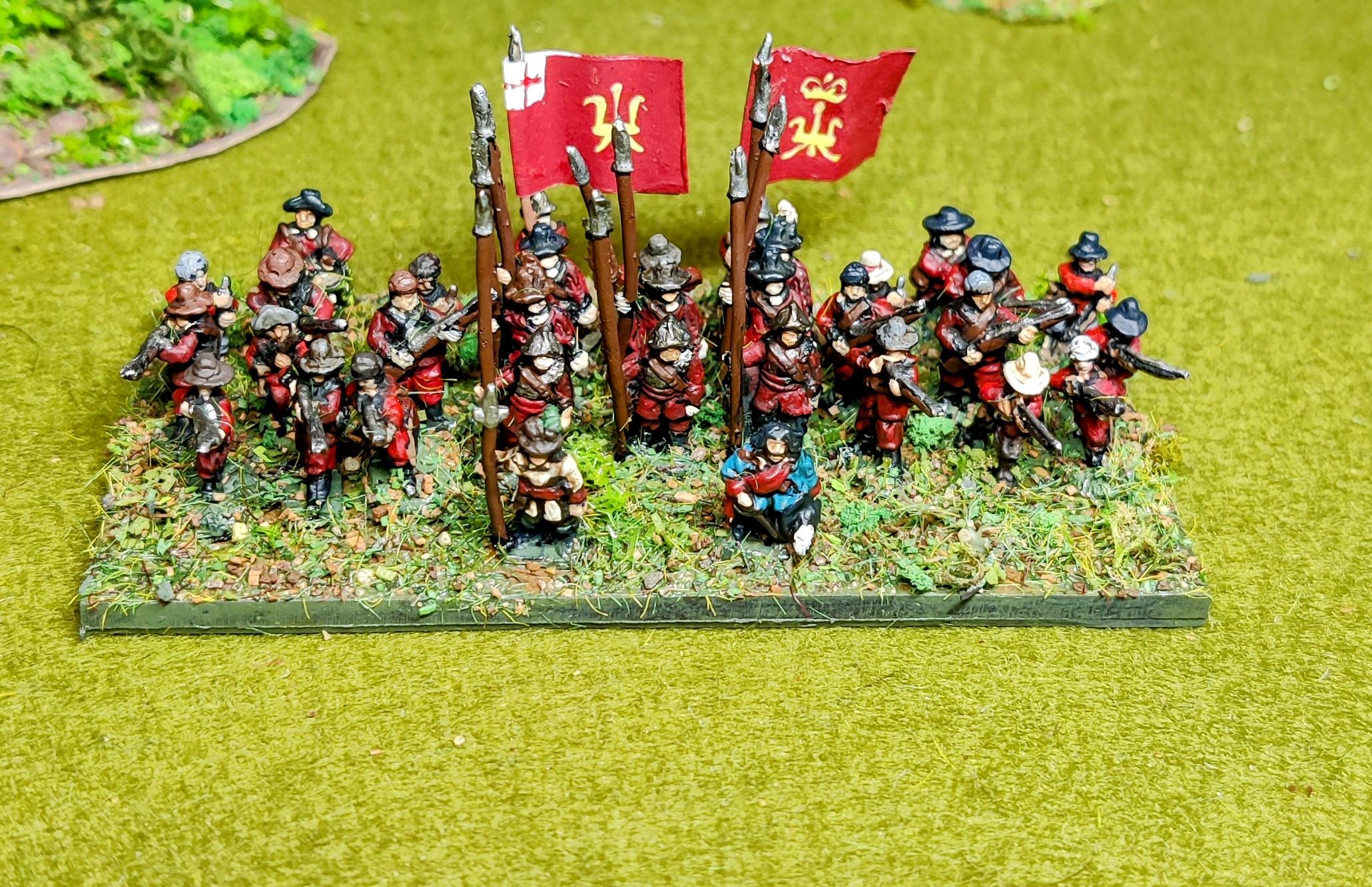 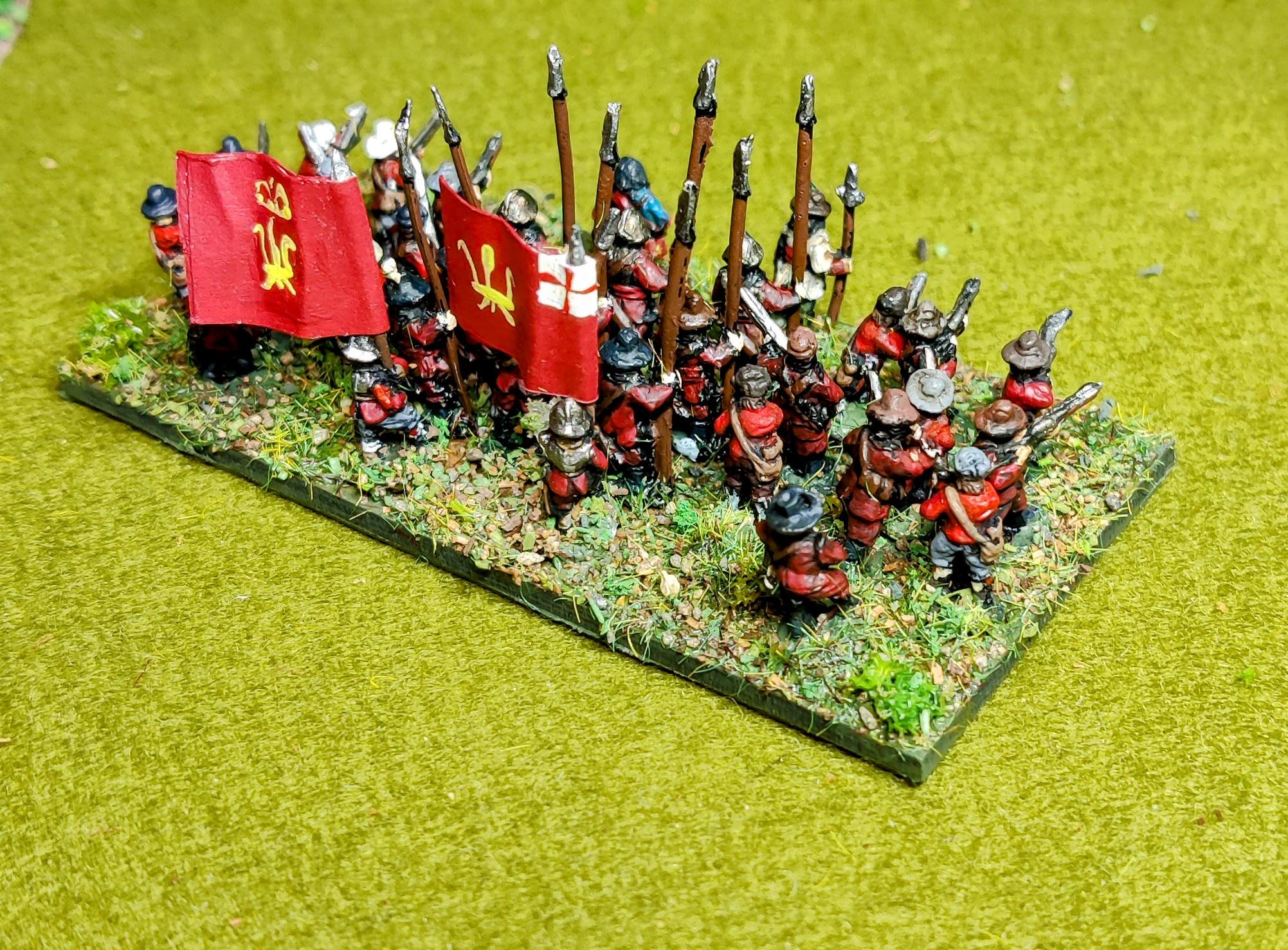 Also (not pictured) had to redo a bit of the king’s flag on the command base as the Scottish lion had mysteriously faded away and upgraded two previous horse units to have bigger flags. While smaller cornets are more realistic, Iike the look of the bigger flags as shown here.

Then this all arrived:

The mdf at the top are trench systems from http://www.supremelittleness.co.uk/sld-10mm/trenches10mm-25mm.htm while the rest is from Pendraken, a few bits on the right to round out my AWI stuff and the bones of some new projects focusing on the Great War.

This is a period I’ve had some growing interest in for a while and decided it was time to take the plunge. I’m currently planning a “big battle” early war set of forces for the Western Front and some mid-war “skirmish” forces.

My aim is to try out Great War Spearhead 2 and If the Lord Spares Us for the early war big battle project, then Through the Mud and Blood and/or Chain of Command for the skirmish stuff. I might give BBB a go too and open to any other suggestions.

I have most of the forces painted up a small starter scenario for the early war game, though have been experimenting with a few different styles of labelling for them.

My initial attempts, all rejects:

Then after some further advice and discussion with others who have done similar projects, round two of labelling:

With the third from the left being the front runner. This allows me to represent three levels of organisation. In GWSH the colour will represent the Division, the stripes the Regiment/Brigade and the number the Batallion. For ITLSU it would be the Regiment/Brigade, Batallion and Company represented. I found bright colours a bit much so muted tones will be the order of the day for background colours, brown, grey, maybe dark red or green.

Here’s the armies done up for the first scenario game I want to play. I’m actually an artillery battery short of the scenario I want to do but will proxy something in while I put my next order together.

Anyway, thanks for reading,