I had a bit of free time this afternoon and with the table still set up thought I’d have another crack at the Sharp Practice AWI scenario. Turns out I was correct on the rules first time round and units can’t deploy and move but can deploy and perform other actions which is where the confusion came from. It was also pointed out to me that typically it was Lt. Colonels in the field so Bradford and Hunsdale have been sufficiently demoted (though will likely refer to them as Colonels still for ease throughout).

The Americans have 3 groups of continental infantry under Lt. Colonel Hunsdale and Lieutenant Shanks, 2 groups of state infantry (Rhode Island) under Sergeant Skelly and two groups of frontiersmen under Sergeants Neville and Chambers.

The Americans are deploying from the road:

And the British are sneaking about the woods:

All forces are now on the table. The British light infantry continue to sneak through the woods: 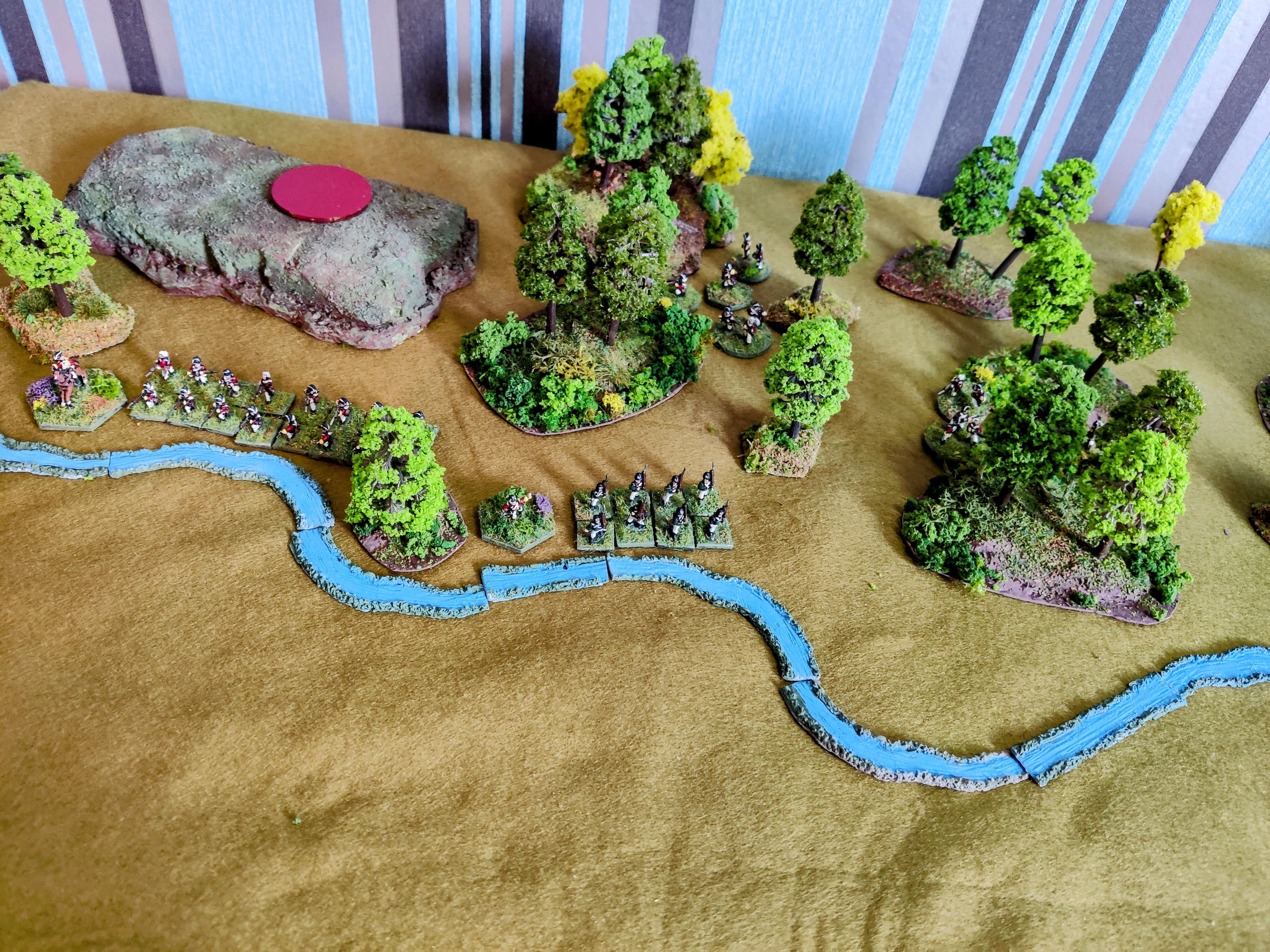 While the Americans work their way along the road flanked by their wily frontiersmen: 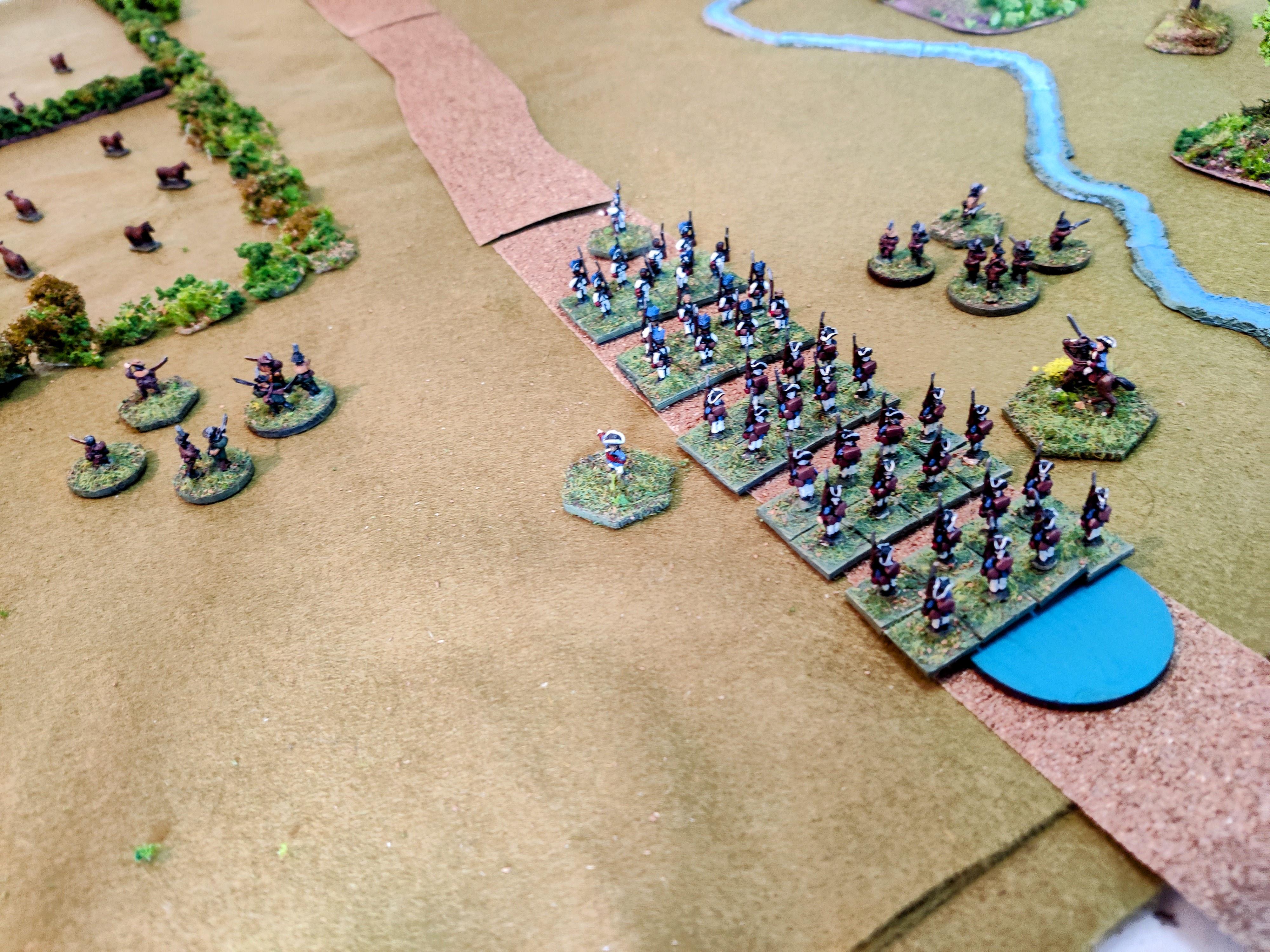 Fire erupts from the treeline as the British skirmishers open up on the buckskin-clad frontiersmen. They dive for cover as musket balls whip harmlessly overhead. “Give ’em hell lads!” the American Sergeant Neville yells as the sharp crack of rifles ripple around him. The screams from the trees let them know they found a target: 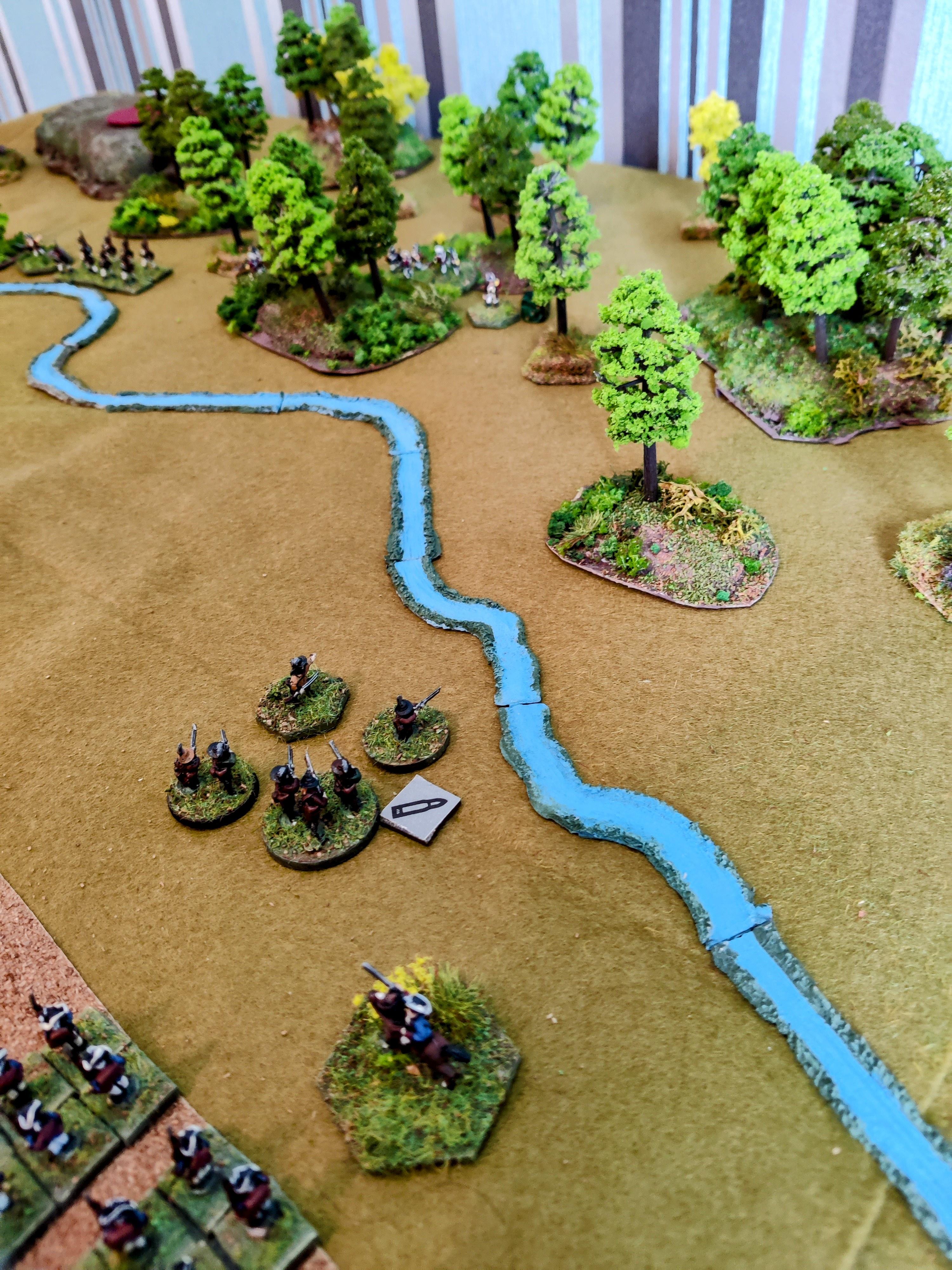 Meanwhile, the American advance spots a line of British crossing the stream ahead: 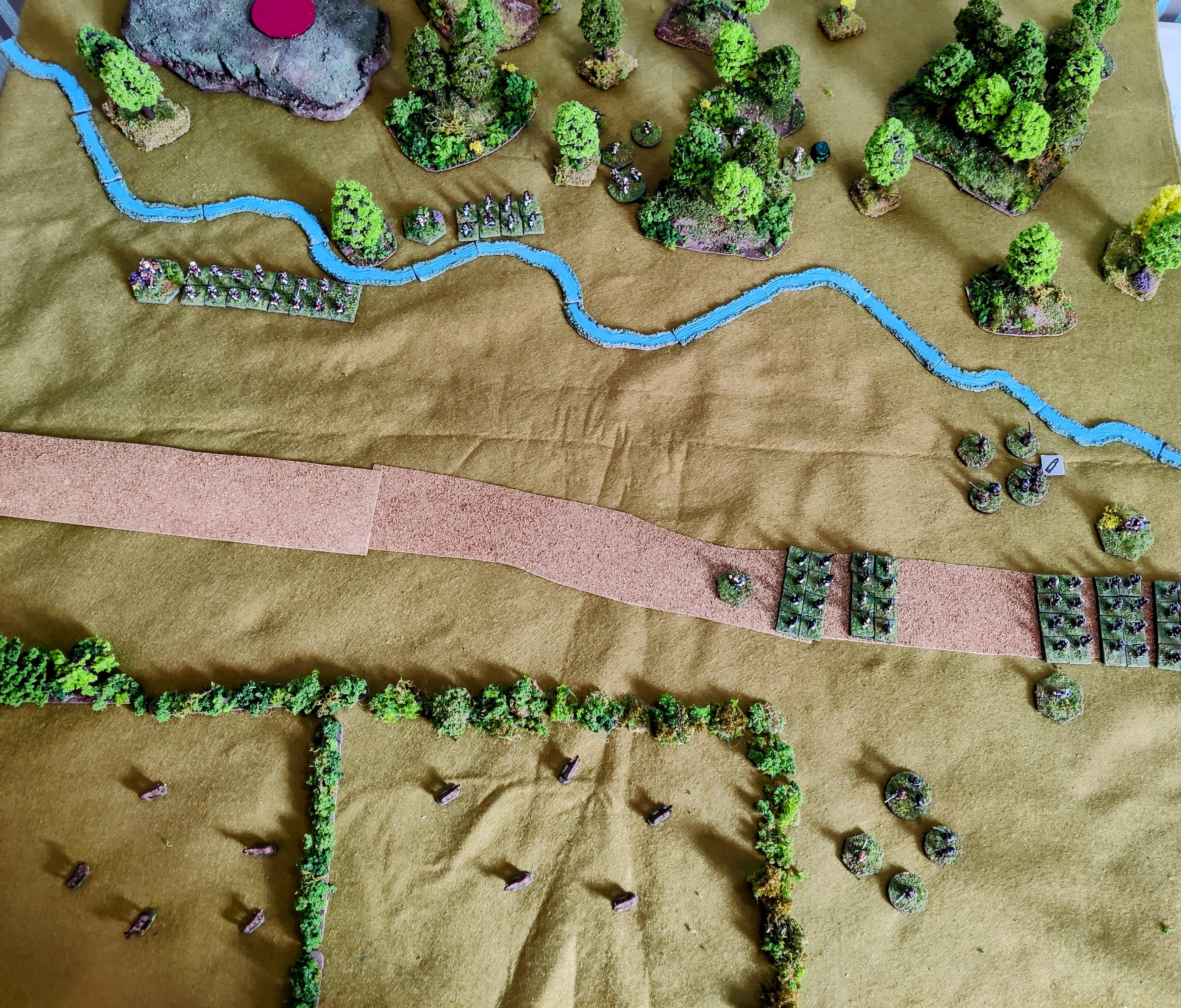 Sergeant Skelly points ahead, calling out to the Rhode Island Regiment behind him. “There’s the enemy in their pretty red coats, we’ll show them what we think of them soon enough!” 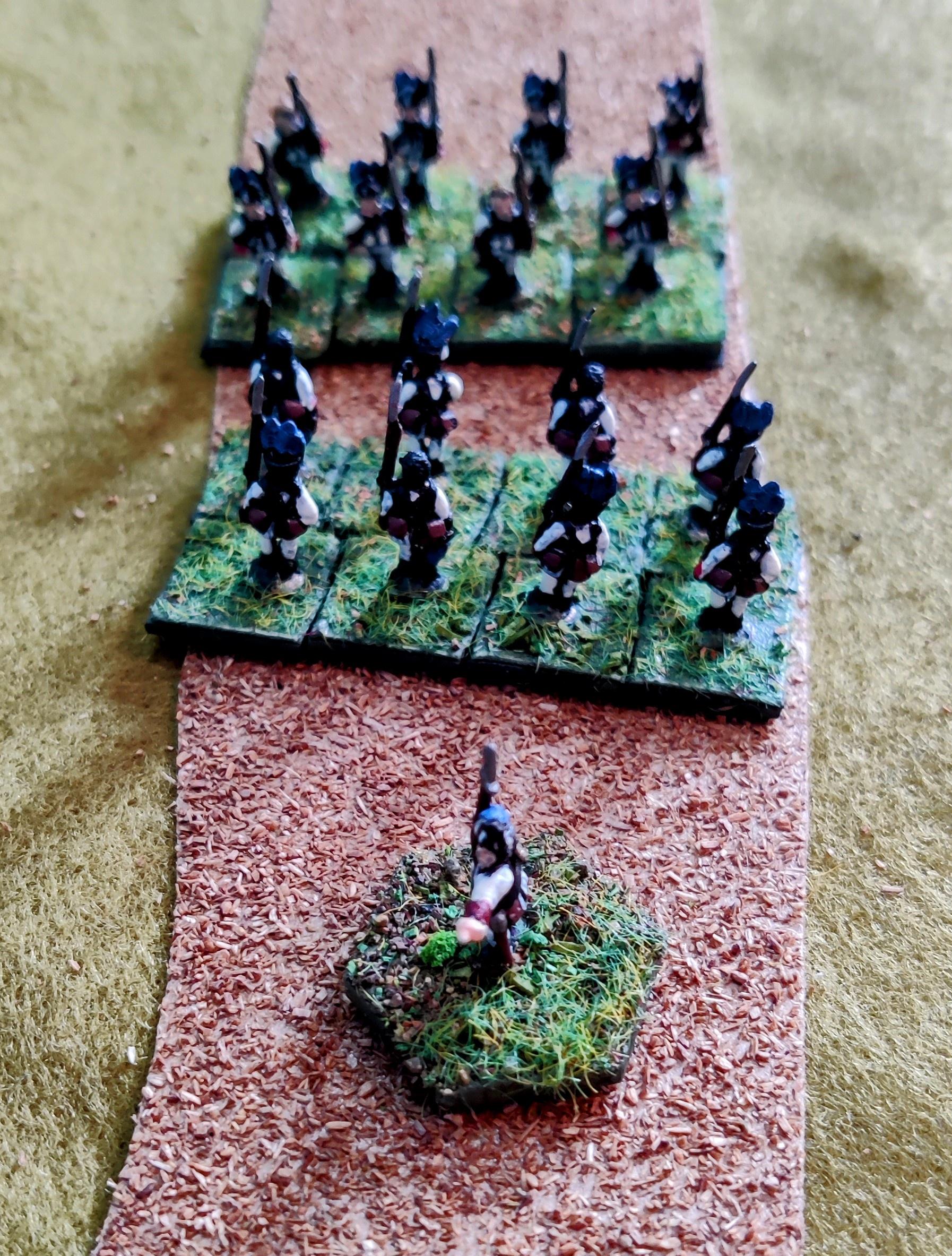 “Keep at ’em boys” the American Colonel Hunsdale shouts at the riflemen while trying to usher his own line troops up to the fight.

The riflemen reload their slow guns and let rip another round of shots, taking the British Corporal Renny through the shoulder and causing the British skirmishers a little consternation. Their compatriots under Corporal Banks fire a few musket balls toward the riflemen but do little more than annoy them.

Colonel Bradford of the King’s Light Infantry tells his men to put a bit of vigour in their step and get up so they can lay into the rebellious rapscallions. He shouts over to Lieutenant Parson to get those Queen’s Rangers on the march too.

Sergeant Skelly of Rhode Island is having none of it however and fires a volley at the advancing green coated rangers, killing one and causing a considerable amount of shock!

Meanwhile, Colonel Hunsdale’s pleas get his troops moving while the rest of his skirmishers hop into the pasture to get a closer look at the cows.

“Fire!” he screams. A wall of lead roars across the field of battle into the white-coated Rhode Islanders. One of their number falls while the rest find themselves shaken.

The Rhode Islanders pull back to catch their wind while Colonel Hunsdale orders the Continentals into line to prepare to advance on the enemy.

Just as the British Colonel prepares to fire again, the crack of rifles rattles out from the hedges ahead. His men cry out in alarm as they hear the whip of rifles shot skip through their ranks, though none are injured.

Meanwhile, the beleaguered British skirmishers under Corporal Renny fall back into the trees while Banks and his mean move forward.

Lieutenant Parsons steadies the British line by pointing out the skirmishers ahead, where Corporal Banks and his men are laying fire into the American riflemen and taking out one of their number. 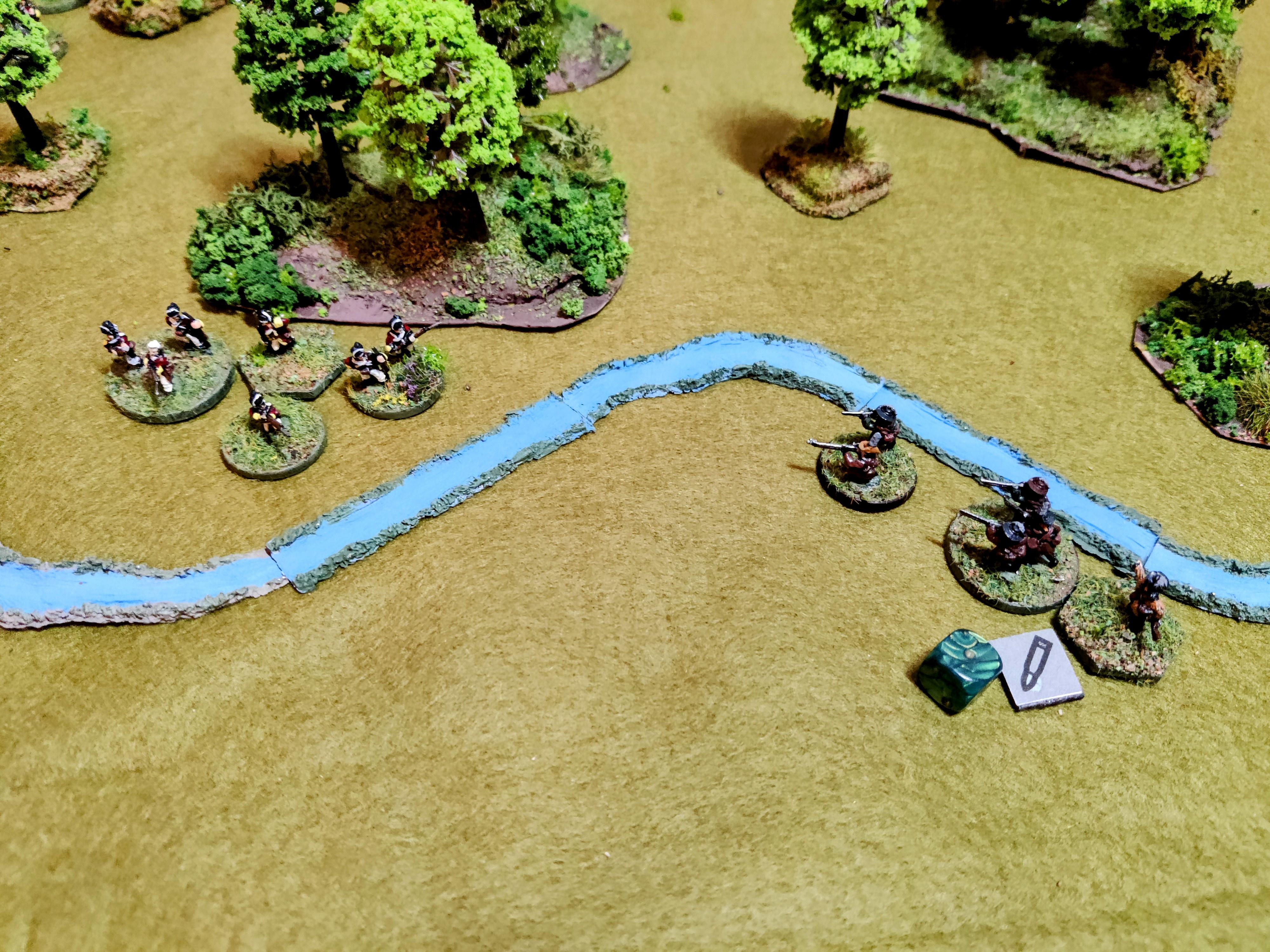 The British move forward while the stalwart Lieutenant Parsons continues to bolster the men’s spirits. Corporal Banks takes it into his head to forgo all this shooting nonsense and orders his men to give the enemy a taste of cold steel. They splash across the stream and close in.

Sergeant Neville is muttering away while reloading, “These bloody rifles take forever to reloaAAGH! RUN AWAY!”. Corporal Banks descends on the frontiersmen who gave his mates so much grief screaming and brandishing a gleaming tomahawk. The usually stout riflemen are caught off guard by the British charge and run for the hills.

With the riflemen out of the way the light infantry skirmishers are suddenly very exposed and the Continentals unleash a leaden fury against them and the advancing redcoats. The British take losses across the line but advance and unleash their own barrage against the Americans. 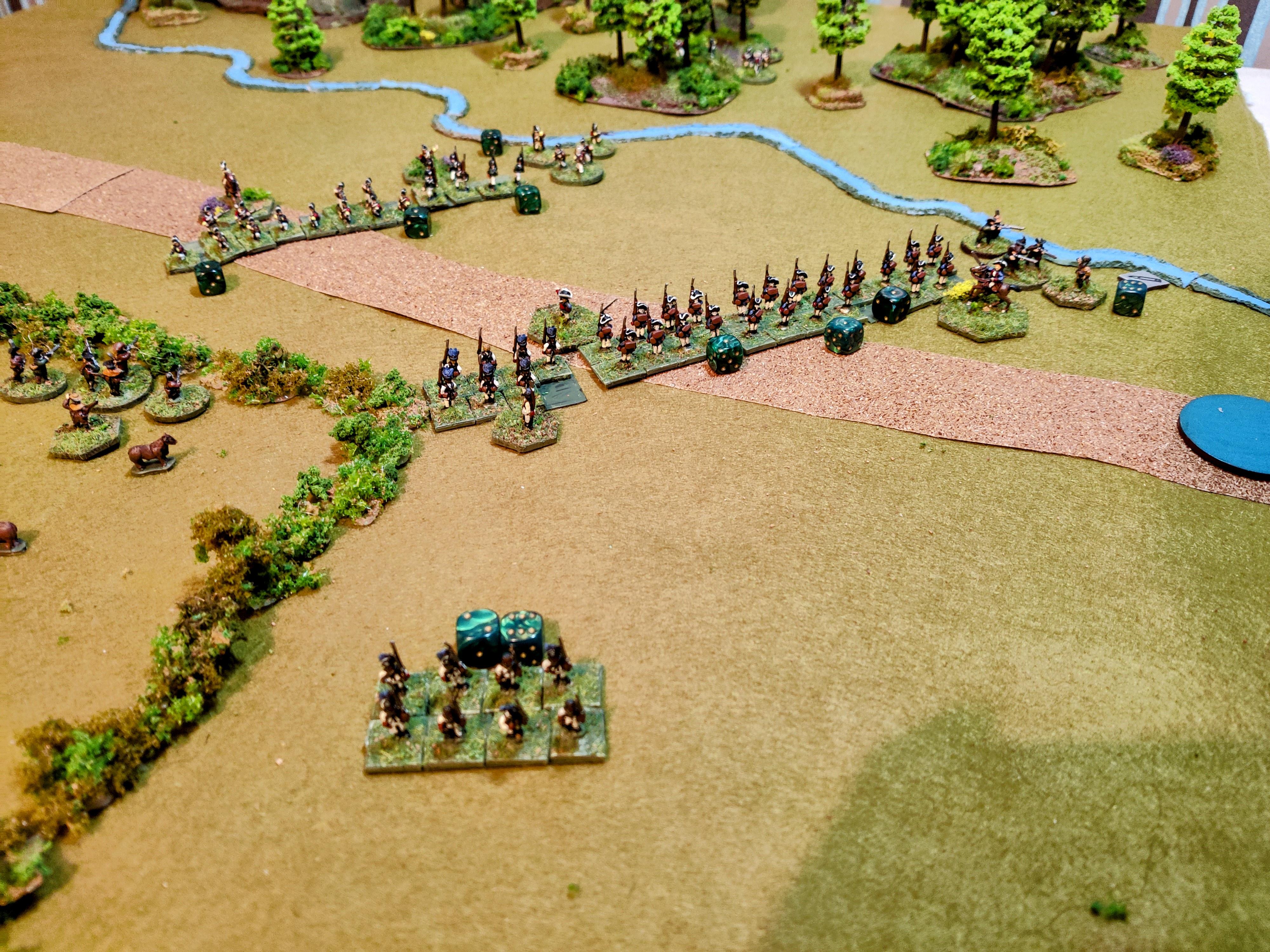 “Come back you cowards!” Sergeant Skelly shouts as half his soldiers run away. Shrugging he moves those remaining up into the line.

“Keep firing men, we’ll soon have them on the run!” Colonel Bradford bellows as his redcoats keep firing madly.

“Sir, what about those rifles in the hedges?” Asks Lieutenant Parsons.

“We’ll deal with them in due course, YOU THERE KEEP FIRING!” The ground between the two sides quickly fills with dense smoke as the two forces line up and blast away at each other seeing both the casualties and the shock mount.

“We have them lads, keep up the firing” calls the American Colonel Hunsdale as the Lieutenants on both sides do their best to rally the troops and keep them firing.

The sharp crack of rifles from the hedges see more redcoats fall and while the British skirmishers work to rally and flank the event forces, a double volley from the Americans send the British line into disarray. 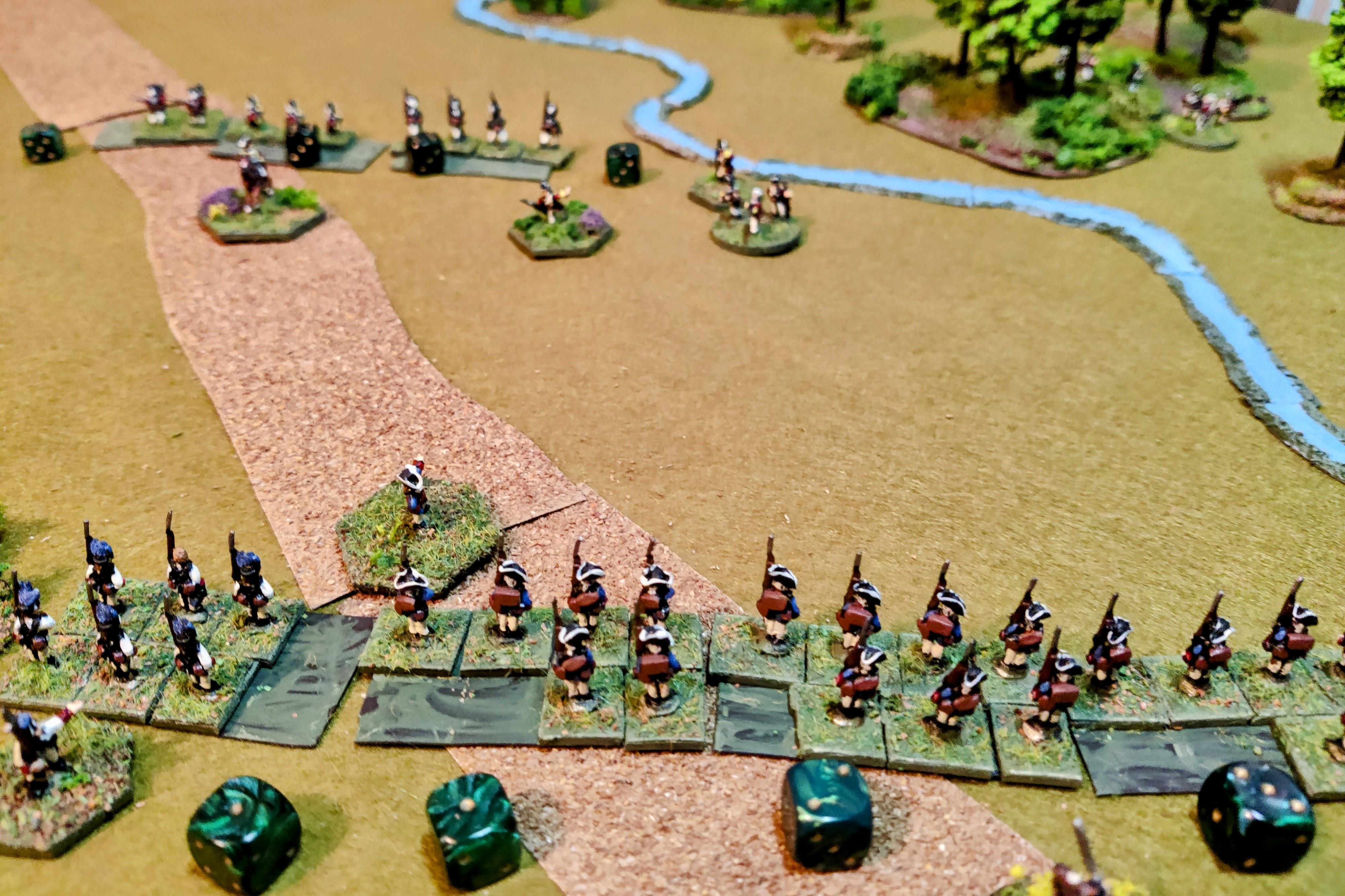 “Look sir, the redcoats are running!” cries Lieutenant Shanks, and right enough the British had had enough of the withering fire from the colonials and were breaking away from their formations. 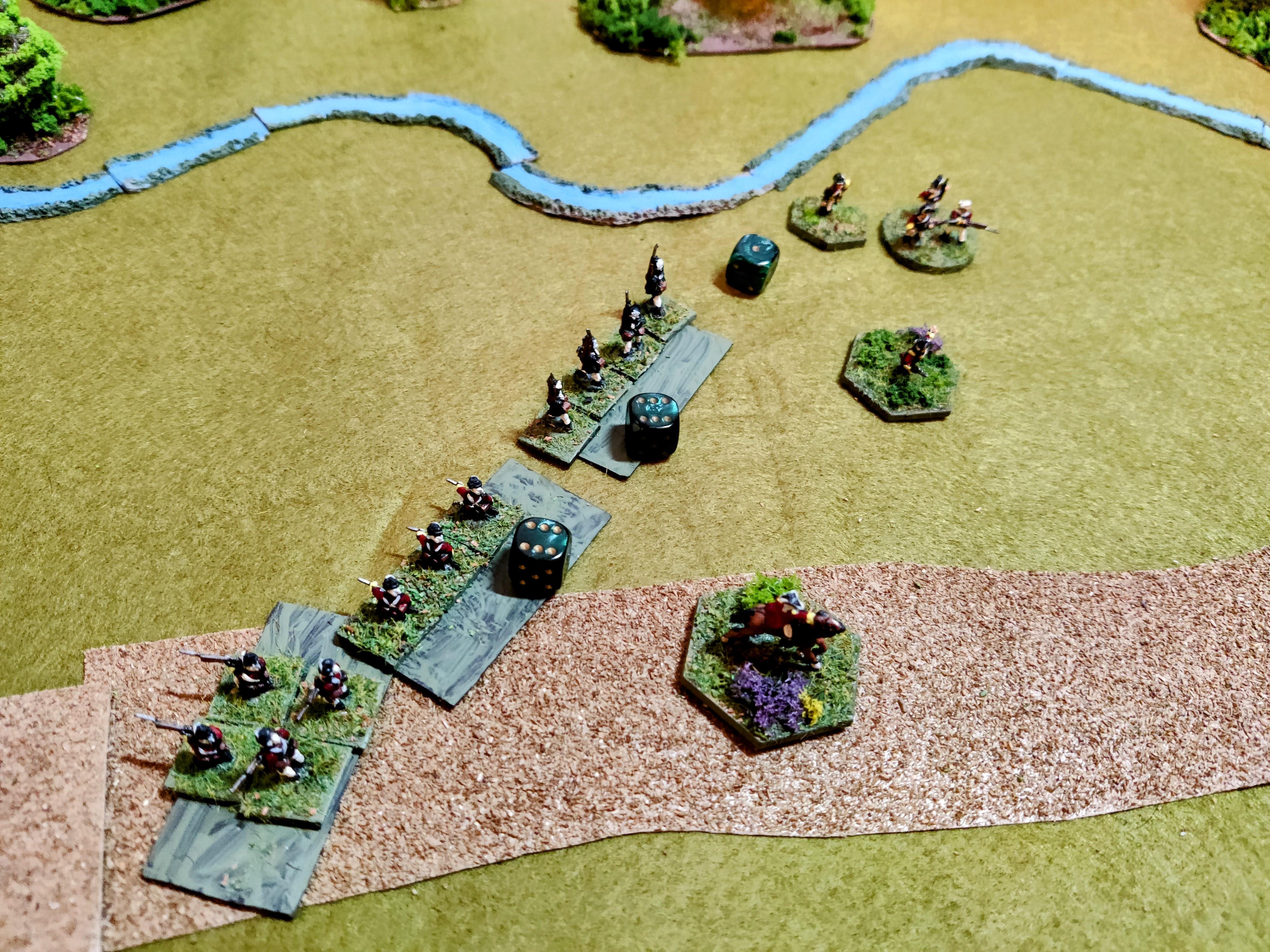 With the British in retreat and my wife ready for bed, I called it quits here and gave the battle to the plucky colonial rebels.

That was a good scrap. I got some bits wrong. With deployment I treated the deployment action as the only thing they can do that turn when in fact it only counts as a single action, they would have been able to move on top of that. I’ll know next time and would likely have just moved the first few turns along quicker.

I also forgot about the uncontrolled fire rule until about halfway through, though don’t think it would have made a difference in this instance except possibly for the British charging the riflemen.

I did also forget about the free movement for the British light infantry in one instance, but was able to retroactively work that in (and they still lost).

I’ll need to have another read through the rules and see if I missed anything else but think I got most of it and all in all it went pretty well. I’ll leave the table set up and might get a chance to play again this weekend.

I’m definitely a fan of the rules, the activation system has some similarities to the one in my own rules I’ve been tinkering with so suits my play style. The line shooting did turn into a bit of a bucket o’ dice on a few occasions which I’m not a huge fan of, but this would be considered a fairly large game given the amount of regular troops involved so normally it would not necessarily be so intense.

Gives me lots of options to play other conflicts in the era I want to dip my toes into without going all in on big battle armies!

You can see some more photos of the forces in my March 2022 Progress Update.