I’ve played a few battles with the Crusades armies using the Hail Caesar ruleset. I’ve found its worked well and provided fun battles. Sadly I didn’t take much by way of pictures from them so don’t have anything to show in relation to a battle report. I’ll be sure to do so if I use them again in future.

As a Christmas gift from my wife-to-be, I received a copy of To the Strongest!, which covers a similar period to Hail Caesar (i.e. EVERYTHING prior to the invention of gunpowder, and even a little into that). I played a quick test game using some hastily assembled forces, then the next day put together a proper order of battle from my collection.

If you’re unfamiliar with TtS! it works on a grid-based system with squares slightly larger than your standard base size (in my case I went with 150mm squares for my 120mm bases) and is driven by drawing from a couple of decks of playing cards rather than dice. You can also use chits to provide a similar experience or use d10 to provide a more linear/less interesting probability flow. Each turn you draw cards to activate a unit at a time and continue to do so until you draw a card lower than the last card you activated with. You can activate the same unit multiple times but gets risky as the card values mount! Similar card drawing is used to resolve combat and special actions.

This was just a straight battle with a moderate army of 150 points each on open terrain.

The Saracen forces under Saladin:

The Crusader army under Richard:

Facing each other down: 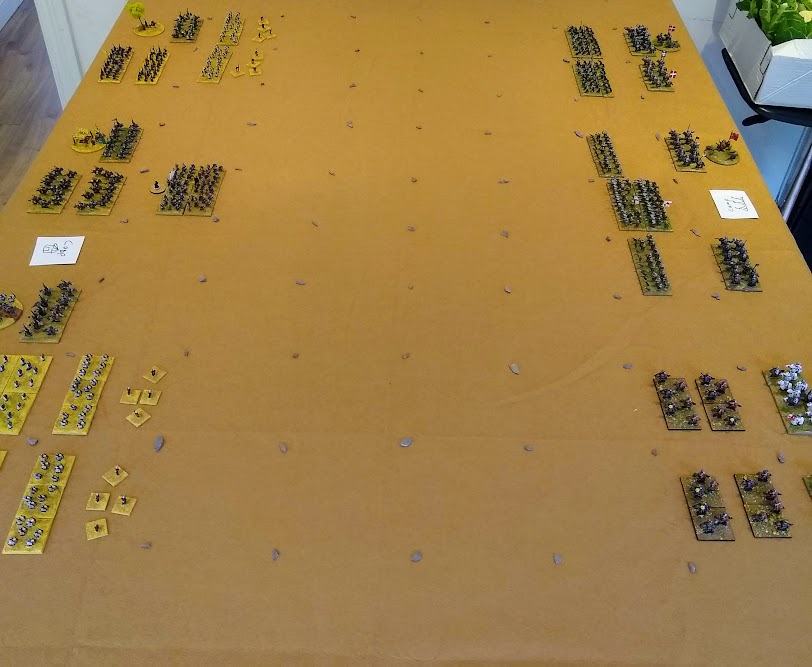 When cards were drawn for the initiative, Richard thought for sure he had lost with a measly 2, only to be pleasantly surprised when his arch nemesis drew an Ace, ceding the first move to Richard. 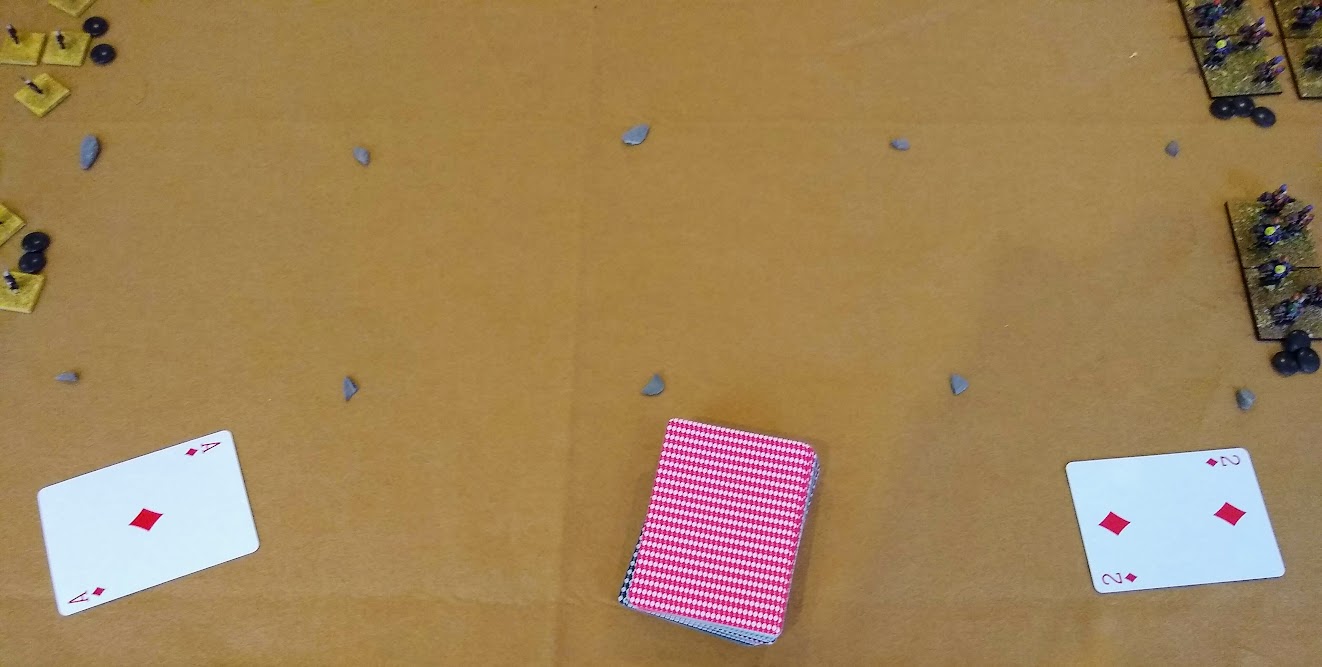 The Knights Templar leapt into action, rapidly advancing up the left flank in an attempt to ride down the archers and cavalry before they could unleash their hailstorm of arrows on them. The Holy Order Knights crashed into the Mameluke cavalry pushing them into disorder, but they fight back valiantly and the knights find themselves disordered as well. The turcopoles fire off a few timid potshots at the Sudanese skirmishers but their arrows fly wide. The mounted sergeants on the far left of the Templar line move sluggishly up, showing an unholy hesitancy unworthy of their devoted brethren! More cautious than the headstrong Templar, Richard moves his forces up to the centre preparing in good order, sending a detachment of knights to back up the left’s advance. The Hospitaliers on the right, usually even more ferociously unruly than the Templar, follow Richard’s push to the centre in good order showing a rare restraint. 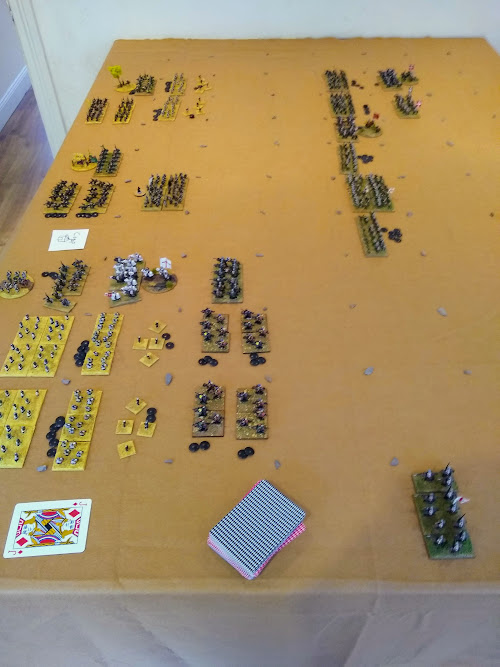 Undaunted by the rapid advance of the Templar upon them, the Sudanese archers and skirmishers showed their worth, unleashing a devastating rain of projectiles into the exposed turcopole cavalry, leaving nothing but the cries of the fallen infidel where two units had previously stood. On the left flank, a steady advance upon the Hospitaliers ended in a stalemate, with the projectiles falling short and leaving the Crusaders unharmed. Meanwhile, concerned about the Templar advance on his right flank, Saladin peeled off two units of cavalry to intercept them while moving the rest of his forces up to meet Richard’s. 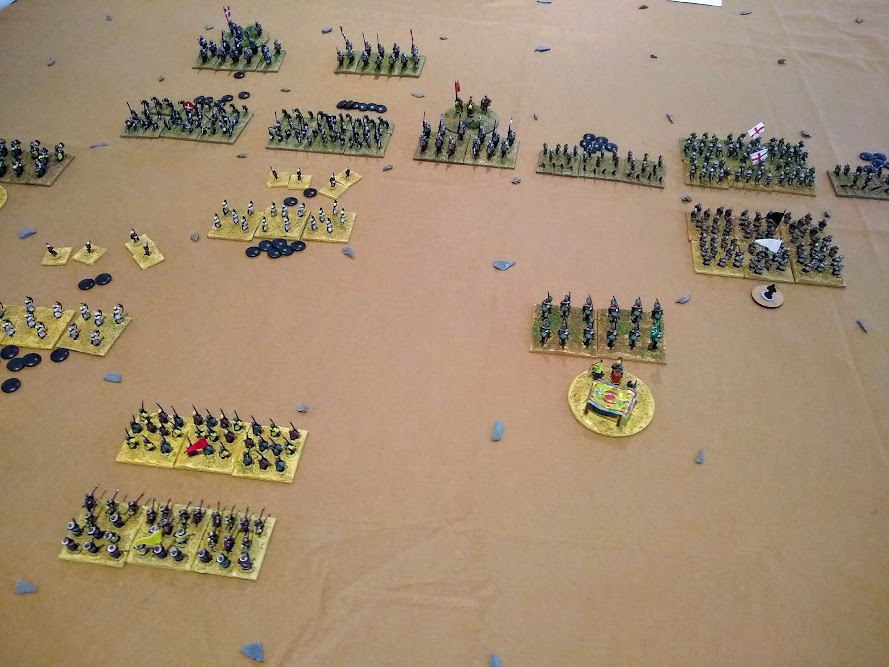 The cavalry launched themselves forward unleashing arrow after arrow into the Templar flank. Allah blessed each shot so that it found its mark, obliterating the mighty Knights of the Holy Order and severely wounding Grand Master Robert IV leaving his few surviving men to drag him from the battlefield. The Templars had suffered a devastating blow. Richard’s knights, seeing the mightiest of God’s soldiers brought low by the arrows of the heathen began to waver. 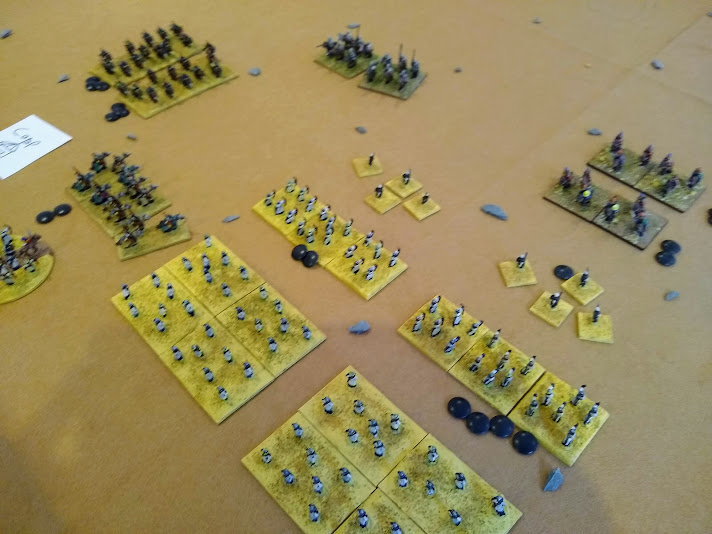 The Hospitaliers on the right flank prove sluggish in their actions, perhaps wary after news reached them of what was happening to their Templar brothers. A half-hearted charge by the knights was repulsed and the crossbowmen failed miserably to hit anything. Richard, knowing he had to do something drastic or face the collapse of his lines raised his sword above his head and with a roar charged headlong at Saladin’s elite cavalry bodyguard. His archers unleash a volley to soften up the ranks before the mighty knights crashed into the elite guard and with the Almighty at their backs, they tore through the cavalry and swept around the back of Saladin’s lines. Saladin himself escaped the fall of his guards and found refuge amongst another unit, though Richard was not far behind him. Mesmerised as they were by their king’s charge, the rest of the units under his command didn’t manage to do anything of significance. On the left, the remaining Templar forces failed to recover from the shock of their loss and did nothing. 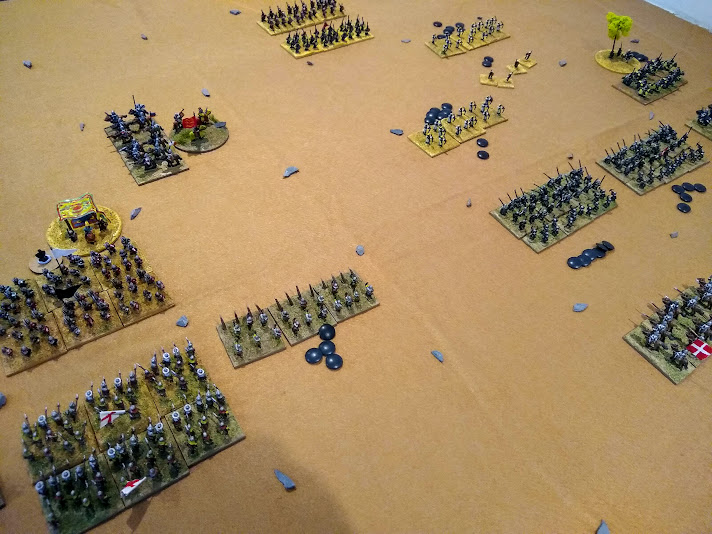 Reeling a little from the bold charge of the Crusaders, Saladin’s forces in the centre do little but consolidate their ground, however the flanks pick up the slack with the right picking off some more of the shocked turcopoles and the left pushing forward into the Hospitalier lines, doing some damage, and putting some unwelcome pressure on Richard’s rear, forcing him to evade. 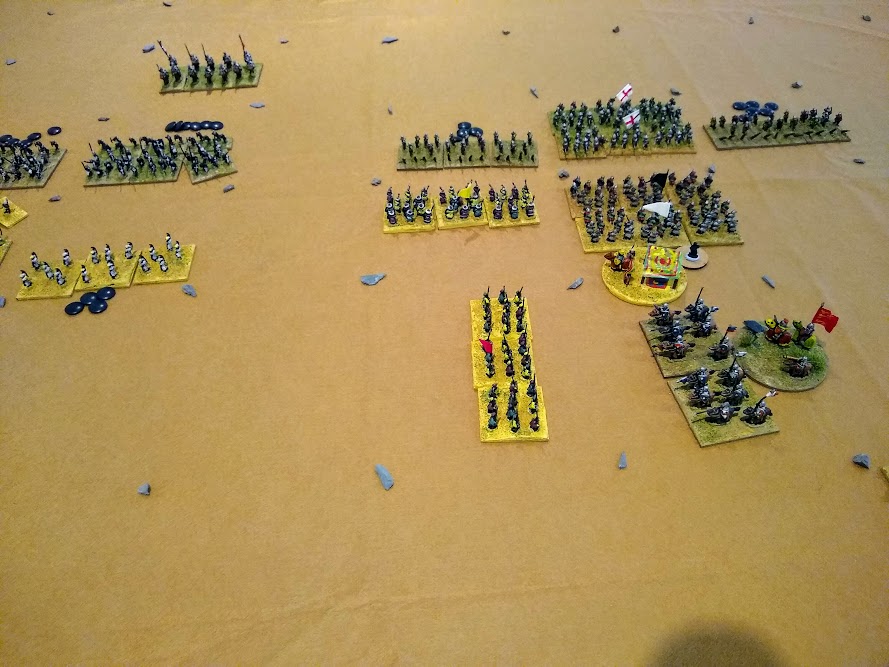 Remaining in a torpid stupor, perhaps they were too much in their cups the previous night, the Hospitaliers do nothing but hold their lines on the right. The infantry in the centre launch their attack on the Ghazi fanatics under Saladin’s command and after a volley or two of arrows the heavy infantry charge forward. The Ghazi put up a heroic fight but the Crusader infantry steamrolls over them. Buoyed by his previous success, Richard launches a foolhardy charge into a unit of spearmen, escaping with his life but leaving his knights dead under their skewered horses. 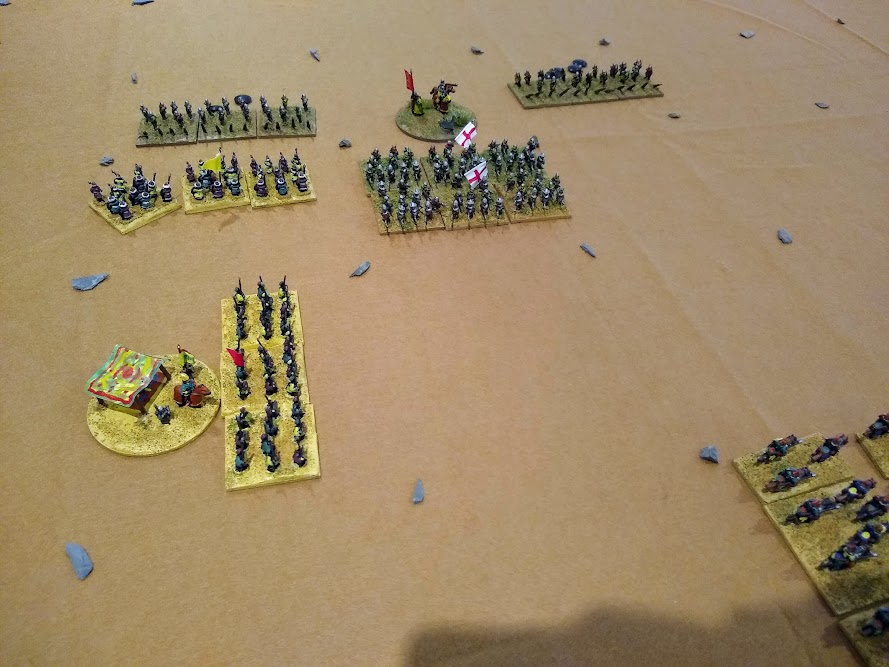 The demoralised Templars left on the field attempt to shoot and retreat, but their hearts are not in it and their arrows fall short. Their retreat is foiled by Saladin’s careful use of a stratagem and the knights rather than retreating towards the camp move forwards into the mouth of the Sudanese archers, pulling up at the last moment just out of range. The Sudanese, being out of arrows, bring their infantry up to put pressure on the remaining infidels. 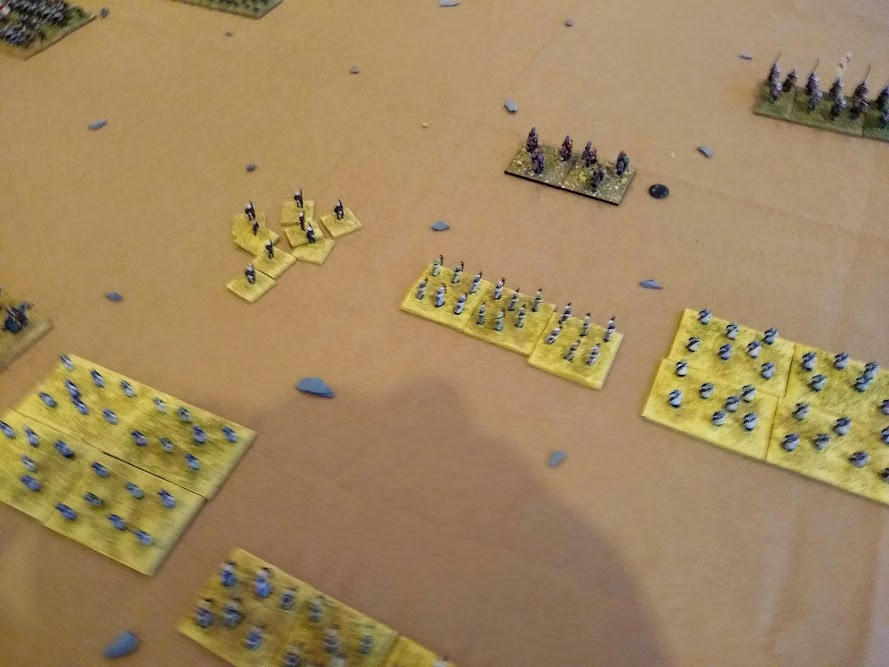 A mighty barrage of arrows from the left flank of the Saracen forces punishes the Hospitallers for their complacency, utterly destroying the Crusader infantry and leaving the knights in disorder. 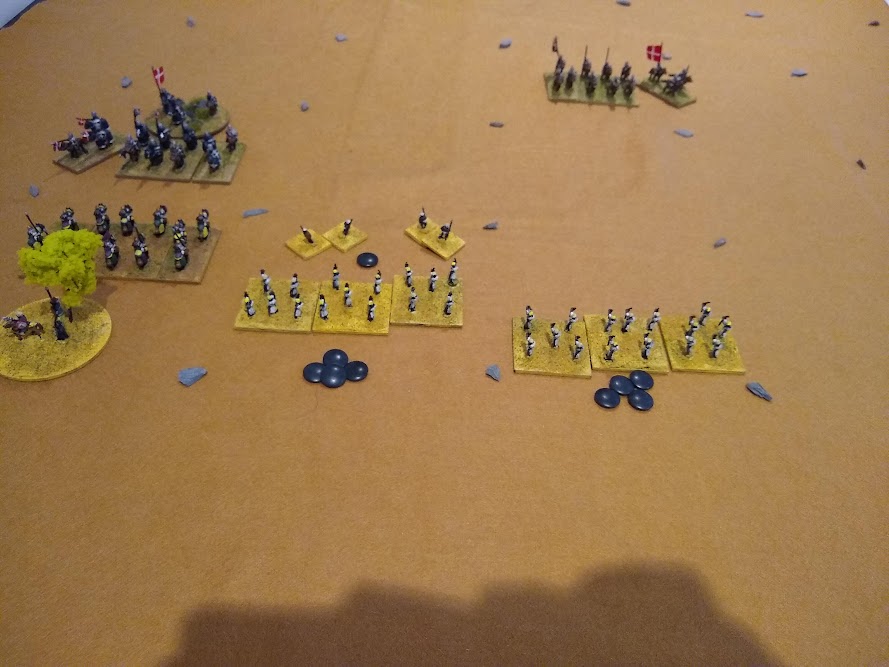 Saladin’s infantry push forward while his cavalry sweep round to let fly the last of their arrows into Richard’s troops and with his right flank in retreat, his left in disarray and his centre assailed from all sides, he wisely sounds the retreat and cede’s the victory to Saladin. Praise be to Allah! 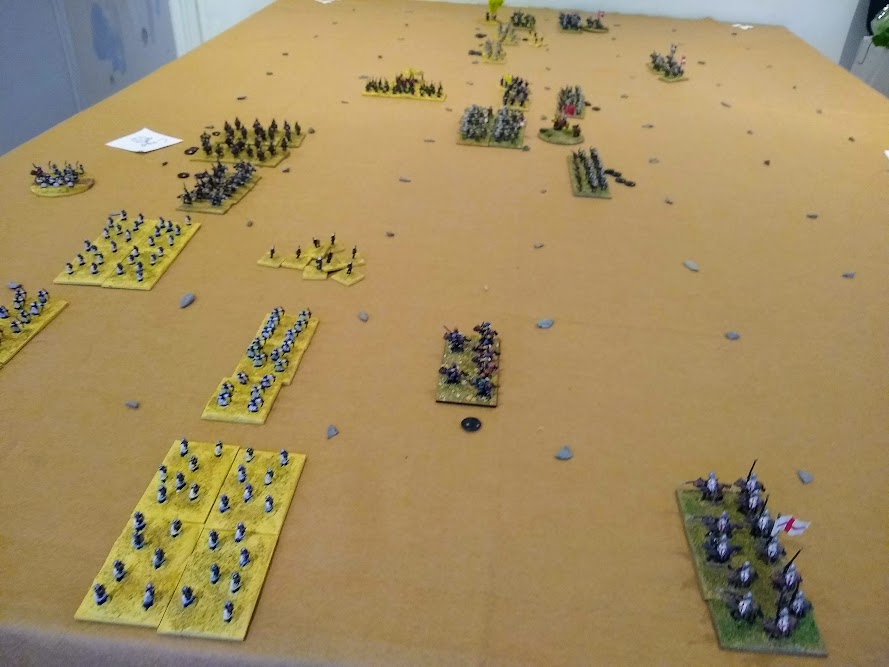 All in all a fun game. There were a few moments that it could have gone either way; had the Hospitaliers been a little more successful on the right flank it could have tipped the scales despite the losses on the left, but such is the way of war.

This was my first proper time playing this rule set, having only done a demo game working through the rulebook before. It’s an enjoyable game and movement doesn’t feel too constrained for being on a grid. There are, however, a few bits that lacked clarity in the rules and I spent a good ten minutes flipping through different parts of the book trying to determine what to do when a general was hit, which really ruined the flow of the game at that point. Since then I’ve discovered a number of errata, additions and plenty of additional material on the publisher’s website, so it’s well supported and provides a lot more clarity through that. There is a new rule set of the version due in future, but they’re focusing on a Renaissance version at the moment which I believe is an expansion of For King and Parliament, an English Civil War rule set in a similar vein. I also own FKaP and will be posting my thoughts when I finally get enough of my ECW armies done to play a game!

I had a good time playing it and will definitely be bringing the rules out again. Maybe playing a similar battle with both TtS! and Hail Caesar and seeing how they compare would be interesting. The flipping of cards for combat resolution was quite satisfying and the tactical decisions on how to use limited ammunition supplies and what activations were the priority gave the game depth.

Apologies that some of the photos are a bit blurry or shadowy, my photography skills need some serious upgrading and I’m just using my phone camera.